After losing to Dominique Wilkins in 1985, Michael Jordan put his best foot forward for the 1987 Slam Dunk Contest.

Mike looked like he retained all his hops after missing the 1986 contest with an injury. His first dunk was a variation of his famous rock-the-cradle jam, packing the basket with two hands instead of one. This didn’t impress as much as his third slam, leaping from the free throw line for a tough 49. Mike finally got a perfect score on a double clutch, windmill slam that was finished with a power right-handed flush.

Michael finished the first round on top, leading him to a matchup with the Portland Trail Blazers Jerome Kersey. In the final round, Kersey put up lackluster scores which gave MJ an advantage after each dunk. He finished a double-clutch right-handed slam that was picture perfect. He then finished of Kersey with a repeat of the double clutch, windmill to secure his first Slam Dunk Contest win.

Mike had announced that he was giving each member of the Bulls roster $1000 of the $12,500 first place prize. Great dunker and a great teammate.

MJ laced up the Air Jordan 2 Low for this moment. The shoe is pretty much the same as the high-top, just with a chopped off collar. Michael Jordan’s second signature sneaker features a luxurious feel with Italian leather and faux lizard skin panels. To give the Jordan line its own identity, the signature Nike swoosh is replaced by the wings logo on the tongue. Full-length encapsulated Air is in the midsole, providing extra comfort to the wearer.

The white, black, and red AJ 2 Low that Jordan wore in the Dunk Contest can be found HERE.

You can find other colorways the Air Jordan 2 at StockX, GOAT, Flight Club, and Stadium Goods. 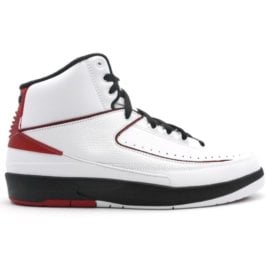 It was all but inevitable but Steph Curry finally became the all-time 3-point leader with his 2974th 3-pointer. The scene: Madison Square Garden on a national stage on TNT. For weeks, viewers have been tuning into Golden State Warriors games thinking Steph could drop double digit 3-pointers to suddenly break the ... Read more

In what might end up as the best game of Giannis Antetokounmpo's career, the Greek Freak dropped 50 points on the way to his first NBA championship. His Milwaukee Bucks teammates struggled early in game 6, so every single bucket at Giannis scored was needed to keep the game close. Critically, Giannis was focused ... Read more

In a defining moment for Giannis Antetokounmpo and Jrue Holiday's careers, the duos clutch play led to a key way on the way to the Milwaukee Bucks' 2021 championship. The series was tied in game 5, with the Suns having possession down 119-120 and less than 30 seconds remaining. Devin Booker rebounded Jrue's off-b... Read more

With one of the greatest blocks in NBA Finals history, Giannis Antetokounmpo crushed an alley-oop dunk attempt from DeAndre Ayton. The scene was game 4 of the Finals, with the Phoenix Suns up 2-1 in the series. There was under 2 minutes left in the game, with the Milwaukee Bucks clinging to a 2-point lead. Devin ... Read more

With their backs against the wall, Paul George and the Los Angeles Clippers once again bounced back, avoiding elimination in the Western Conference Finals. The Phoenix Suns continued to claw back from an early deficit, but PG answered to snuff every run. George looked so confident out there, he even dropped Chris... Read more

The legend of Trae Young's magical 2021 NBA Playoff run reached a fever pitch, with his crazy game 1 performance against the Milwaukee Bucks. Young shot just about whatever bucket he wanted, particularly his patented floater over the Bucks defense. Trae was so good, even made a fool out of one of the best defensi... Read more

In one of his greatest career moments to date, Devin Booker came up big in notching his first triple double ever. All while taking down the Los Angeles Clippers in game 1 of the Western Conference Finals. Booker played the role of primary ballhandler this game, with Chris Paul out due to COVID safety protocols re... Read more

The summer of Trae Young saw clutch shot after clutch shot from the Atlanta Hawks guard, including this one against the Philadelphia 76ers. The Hawks were shockingly up 3-2 in the series against the number 1 seeded Sixers, but were down late in the 4th. With Tyrese Maxey clinging to Young like glue, Trae had to p... Read more